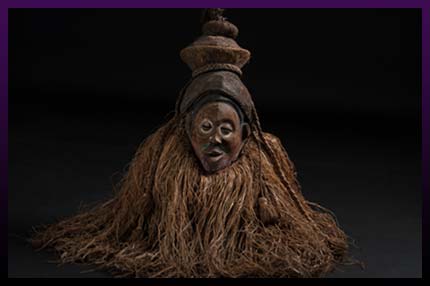 A voodoo doll is used in Haitian witchcraft spells. It is usually made from twigs, rags to represent clothes and animal fur to represent human hair.

More expensive voodoo dolls are made from human hair (usually cut from the head of a dead man) and pieces of clothes (also torn off from the clothes worn by a dead man). Such voodoo dolls are highly dangerous because they connect your energies with the energies of the world of the dead. As a result, it may affect your physical and emotional state, while you will see nightmares and have suicidal thoughts. Such voodoo dolls need to be burned down and the ashes have to be thrown into a river or stream.

If you have a souvenir voodoo doll, keep it in a box or under a glass dome. This will prevent the doll from establishing energy connection with you or other people. Besides, do not let other people touch your voodoo doll. Designed for Haitian black magic spells, it can absorb their negative energies and later direct them at you.

Ritual masks are used by real shamans casting Haitian witchcraft spells. Those who have not been initiated into voodoo magic are not allowed to even touch Haitian magic masks. According to Haitian beliefs, evil spirits live inside those masks and when a ritual is being performed, the spirit penetrates the shaman’s body giving him its powers. The rest of the time the spirits look for people with poor subtle bodies to use them as energy donors.

Souvenir masks which are not designed to be used in Haitian black magic spells are not dangerous. Nevertheless, they should not be kept close to mirrors, doors and windows or in children’s or elderly people’s rooms.

If you have bought an old and used voodoo mask , show it to a professional spellcaster or at least bioenergy specialist to make sure it is not dangerous.

The good news is the majority of potions for Haitian witchcraft spells which can be found on the Internet are not real. If you get one from a real voodoo sorcerer, keep it locked and never open it up. This will ensure that its energies will not harm you and your family. 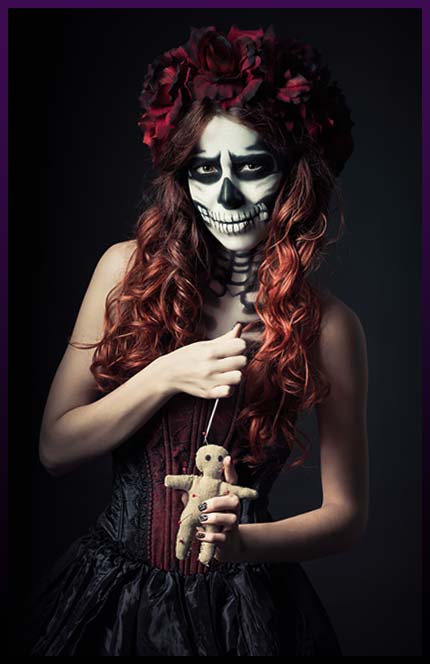 Amulets and talismans designed to enhance the efficiency of Haitian magic spells are to be kept like any other magic accessories. Information on how to handle magic accessories can be found in other articles posted on my website.

To activate a magic spear for Haitian witchcraft spells, let it “taste some blood.” By cutting yourself with a Haitian ritual knife or magic spear, you will wake up the powers sleeping in it which are eager to participate in voodoo rituals. If you refuse to do as they wish, they will torture you forcing you to perform voodoo rituals. Otherwise, you will have to get rid of this Haitian magic accessory along with the spirit living inside it.

Dried chicken heads are widely used in Haitian magic rituals. Most people are aware that when a Haitian witchcraft spell is cast, the spellcaster needs to chop the head off a chicken as a sacrifice to voodoo gods. Such souvenirs are very popular also because they are quite cheap (you can get one for about $2).

The majority of dried chicken heads are not dangerous because they have never been used in Haitian black magic spells. However, they are dangerous like any other dead animal parts, such as heads, skins and horns, and stuffed animals. They cause premature aging, fatigue and apathy which is why I strongly recommend you to get rid of them, if you have any, by throwing them into a fire.

An altar for Haitian black magic spells is more dangerous that any other magic accessory described in this article. Even if it is a fake, it can still be a sort of alternative airport for voodoo spirits and gods, or a portal through which they may come to you.

Their target is your energies. It is no surprise that people notice their lives get worse after buying a Haitian magic altar. It brings ill luck and causes family conflicts; people lose their jobs and fall ill. Many people report bad sleep and experience memory, psyche and nervous system problems.

If you have brought a Haitian black magic altar to your home and can feel its negative influence but do not want to dispose of it, do as follows: hammer three iron or silver nails into the bottom part of the altar top. This will deprive the altar of its magic powers turning it into a regular souvenir or “museum exhibit.”

This will make the altar useless to spellcasters but still valuable to voodoo collectors as a unique voodoo item with its own history.