Possessed people often find themselves in a bad mood, thinking about something horrible (like a suicide).

It means in the head of the person is a devil. Psychics can see them in the form of a ring rotating clockwise. 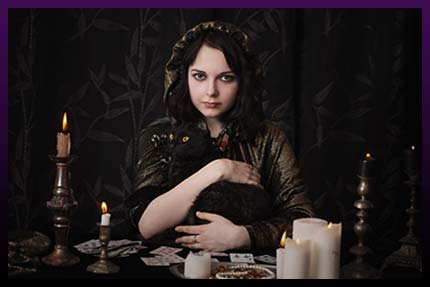 Exorcism should be performed somewhere in the country (like a country house or a forest). Make a fire (make sure it will burn as long as the ritual is performed). Cut off a thin aspen twig which is about 30 cm long. The twig should have as many sprouts as possible. After you cut them off, 3 cm twigs should be left. Then the spell caster or the operator crosses himself three times and says, “In the name of the Father, the Son and the Holy Spirit. Amen.”

During the ritual, the victim should face the fire, looking at it from west to east. The spell caster takes the aspen twig with his both hands, stands behind the victim and starts rotating it between his fingers counterclockwise. The devil’s length is about 5 meters. After he’s “wound round the twig,” throw it into the fire and leave together with the victim.

If the victim is tall, he can sit down on a chair, so it was more convenient for the healer to perform the ritual. Take the chair after the fire burns down.

Instead of the aspen twig, imagine a light ray. The ray should the color so when mixed with the rotating ring, it gave a new color. For example, if the ring is dark blue, the light ray should be yellow and so on.

The light ray should be rotating from bottom to top, towards the movement of the ring, and do it as soon as the devil livens up. For example, the patient’s ring is black – the ray’s white. When mixed together, they give a grey color

You will need a small magnet. Tie it to the part of the ring which has the biggest diameter (forehead). Don’t untie the magnet for 5 hours. Repeat the ritual three times (three days in succession). Then take the magnet to the forest.

This ritual should be performed on Thursday. To begin with, take a five cent coin and put it on the forehead. Don’t remove it for three hours. The coin should be put tail up. After that, put it in your pocket and go to the church. Put 7 candles to the icon of Jesus Christ. While leaving the church, take the coin out of your pocket and give it to a beggar, without touching his hand (tail down).

It’s better to use this method on Friday, at around 1 p.m. (preferably at ten minutes to one). Put three white beads of сердашка on a closed eye. Leave the beads there for ten minutes. Then, keep your eyes on a blue sheet of paper for 11 minutes. Try to find a large sheet of paper and hold it at arm’s length.

After the spell to exorcize the devil is put, don’t eat or drink anything for 30 minutes. Have a rest.