If you keep thinking about taking revenge on your enemy, black magic can be of help.

Let us begin with its disadvantages:

·        The moral side of this choice. Your enemy will not even know where all the troubles come from and how this streak of bad luck even started.

·        If you make a mistake while performing the ritual, it can backfire making you deal with what you tried to make your enemy go through.

·        Your enemy can hire a professional magic practitioner. As a result, you will have to enter into a magical confrontation with him.

But if you want to do it anyway, choose one of the suitable options for using black magic at home.

Remember that home black magic is performed without wearing a cross, and with all icons covered or removed from the room where the ritual is performed. All rituals should be performed at night. 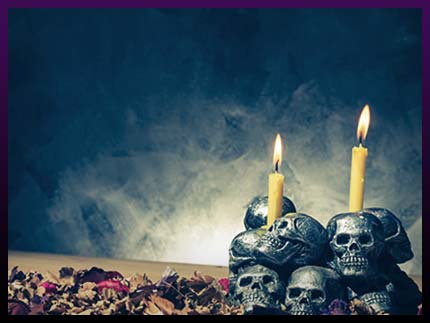 There are two categories of rituals: positive (rituals of help) and negative (rituals of avoidance). The first type includes magical actions carried out by a person in order to have the support of a certain higher power. A lot of positive rituals can be found in student folklore, especially in that part that concerns passing exams and defending scientific works, for instance, rubbing the student’s record-book over a dog’s nose; “sleeping” on all the notes and textbooks on the subject which are put under the pillow the night before the exam; putting a coin in the right shoe.

Negative rituals help avoid potential trouble. As a rule, such rituals sound like a prohibition: do not wish a “quiet watch” (for ambulance workers), do not have your hair cut (for pregnant women), do not drop the rings (for people who are going to get married), and so on.

All the events taking place in the world are the consequences of some choices and decisions, while what may initially seem chaotic or accidental is in fact the consequence of someone’s influences. Therefore, when you use rituals of black magic, you take responsibility for someone’s fate. Black magic is about casting spells and performing rituals that do harm to people, causing some financial and personal losses, and all sorts of trouble.

Black magic encourages evil spirits to obtain personal gain or to cause harm to someone. Black magic appeared from the man’s desire for power and other benefits. A black sorcerer can enter a person’s bioenergy field making this person sick or even killing this person.

The magic of voodoo is a mix of faith and witchcraft which originated in Haiti. It is accompanied by ritual murders, blood sacrifices, etc. Sometimes a voodoo doll is sent to the target.

Black magic can turn a person into a zombie, causing a decrease in physical and intellectual abilities, as well as various phobias and fears.

If you find some ground lumps, ropes with knots or salt in your house which are not supposed to be there, it may mean that someone is trying to curse you. If that is the case, contact a professional spellcaster as soon as possible and he will help you find out what is going on and figure out what to do about it.

How to punish a bully

You can punish your bully with painful acne. After a while the pimple bursts, and 6 to 12 new ones appear around it.

Take a red woolen thread about half your hand long. Tie eight knots, representing the appearance of your bully. Put the thread in a place for the bully to step on it. If someone else accidentally steps on the thread, nothing bad will happen to this person.

Another ritual of voodoo magic is performed on Saturday. In the morning go to the farmer’s market and buy a bull’s heart. Go to a secluded place so no one would bother you. Dig out a hole and fill it with lime. Place the heart of the bull on the lime and press it down a little with a black-handle knife, visualizing your enemy and saying his name. On your way home, do not talk to anyone and do not answer anyone’s questions.

This ritual will bring a lot of suffering to your enemy causing various diseases in him. If you perform this ritual every day for one month, your enemy will die.

The spell of the wind 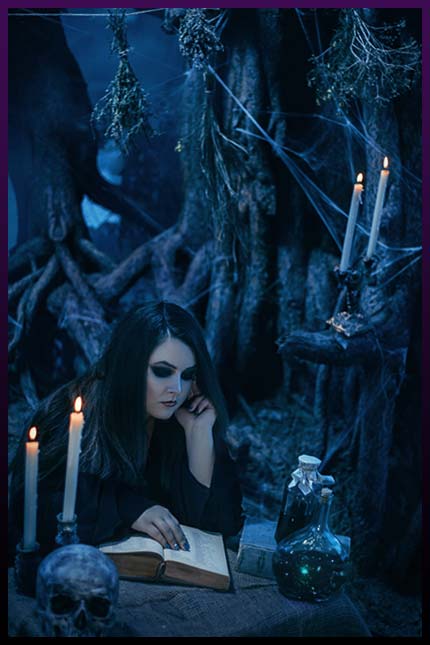 This is a simple curse which causes multiple fights and arguments both at home and at work.

Wait for a windy day. Sweep the floor, collect all the garbage in a bag, and say,

(Your enemy’s name), I am throwing rumors, gossip, quarrels, and discord your way! In the wind my revenge is flying.

How to end your enemy’s streak of good luck

If your enemy is lucky and rich, you can try to attract his luck to yourself. Borrow some money from your enemy. Take a handful of salt and say,

It is not salt that I am throwing, but pain; I am stealing his good luck and peace.

Throw the salt over the threshold of your enemy’s house. Give the money back to him, but with a different bill. Keep the borrowed bill as a talisman.

It is the rituals of black magic that can attract money to life. If you direct your energy in the right way, you can become a successful and rich man with ease.

Take a knife with a steel handle, some conifer needles, and sandalwood oil. Perform the ritual at night (Friday to Saturday). Before you start it, remember that any ritual of black magic requires certain sacrifices. To become rich, you will have to give something up.

Put the knife on a gas stove and light the stove. Watch how the knife gets hot and black. Every five minutes throw 3 needles and drip 3 drops of sandalwood oil on the knife. In half an hour, cool the knife and scratch yourself with it on the back of the palm at the base of the thumb. Do not wipe the bloody blade. Stick the knife into the front door box.

This magical item will attract flows of money energy to your home. Every time you walk by the knife, imagine how your life will change when you get rich.

Do not tell anyone about this ritual. If someone asks you about the knife, say that this is how you are driving negative energies away from your house.

You need to use black magic very responsibly. Remember that negative energy is concentrated in all items used for black magic. Do not forget that mispronunciation of any word of the spell of black magic can lead to unpredictable consequences.

You need to be very careful with love spells, because it is still black magic. When you perform black magic, you ask some spirits for help, which will punish you if you do something wrong. So if you want to use black magic love spells safely, contact a professional spellcaster as it is the best way for you to become happy with your loved one.