Today, people know little of the magic of the runes, because access to historical sources has been shut off. Just a few are granted access to this kind of literature. The runes are also used to cast runic hexes. 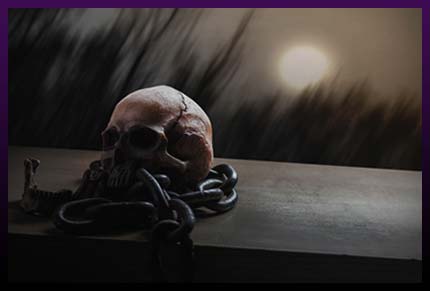 Thurisaz, Hagal, Urisaz are the runes of complete destruction. Sorcerers can change runes to destroy a particular part of the person’s life. For example, Isa, Isa, Isa, Isa is a simple formula used when the spell caster needs to stop the development of something. Thus, with its help, he can stop cancer from progressing (cancer is a hex). At the same time, it can be used to prevent a business from flourishing, cause dullness or inability to conceive.

Runic hexes cause potency problems. Hagal, Uruz, Hagal – destroys the victim’s will. The person makes no resistance; he can’t make decisions and work. Such formulae are like a bomb explosion, so one has to be very careful while dealing with runic hexes. Jera, Hagal, Jera – this runic combination has a deep philosophical meaning. Strange as it may seem, this hex is cast for absolution. It means that the problems and misfortunes it brings improve the person’s karma. The “sword of Damocles” is hanging over his head and the person’s wickedness results in ennobling and cleansing suffering.

With the help of the runes, you can make a person an outcast, cause loneliness or poverty. The runes can help you eliminate your business rival, curse your enemy’s home or make him have nightmares. In fact, any person can come under the influence of a powerful spell caster. Resisting runic magic is possible, but difficult. Spell casters do what they have to do and sometimes they have to act regardless of anything.

Ehwaz – transfers the effect of the hex to the victim.

Hagalaz – destroys the victim’s protection shield, including the magical cover, and casts the hex on a particular body part.

Laguz – disguises the work of this hex.

Making a person an outcast

It’s a very powerful runic sex. Before you do anything, cast a protection spell over yourself. Take the victim’s photo and draw Algiz turned upside down over the victim’s head. Draw Isa on the bottom and two images of a man on the left and on the right.

“Let all magical protection of (the victim’s name) be destroyed. Let my influence be stronger than ever. Let the object break off all contacts and communication with other people. He won’t have friends and hear good words. Loneliness will become his best friend, while all communications channels will be broken.”

Let (the victim’s name) become the object of this hex.

Let (the victim’s name) be put the bonds of enslavement (Evaz),

Which will break his will (Hagalaz)and subdue him to the subject (name).

Let the effect of this hex last as long as the subject wants.

If the hex is cast with the help of a talisman, make a bundle and shape it as a hex (multiuse).

Visualization: the object is put in the wood stocks with a steel chain. The subject holds the chain in his hand (Hagalaz enslavement of the object by the subject).

A runic hex to hex a house

Isa – negative energy is frozen into an unbreakable whole.

Nightmares. The feeling of absolute defenselessness, fatal despair. Mannaz is a power-intensive rune. It is identified with the object and is told that it will take the energy it needs from the object. Thus, the object feeds his own fears. The runes in the horizontal line are said in pairs. The first one – per.Sowely+per.Perthro; the second one – per.Perthro+Evaz.

1. Thurisaz finds the victim’s weak spot and attacks it. Thurisaz opens up the “gate” which will be used to influence the victim. It also pierces the shields of the victim’s conscious and subconscious mind.

2. Hagalaz aims the blow at the punctures.

3. Isa freezes, extends the effect of the script.

Mannaz points to the object (the one to be punished);

Hagalaz symbolizes the hex. Hagalaz destroys the old situation, suffering, expiation, and builds a new one in which the object will be a good person (because he knows what exactly causes his disease).

Tiwaz (turned upside down) makes the object vulnerable to the punishment and deserved retribution. Tiwaz is not only the judge, it’s also the executer.

Algiz (turned upside down) means destruction of the protection cycle 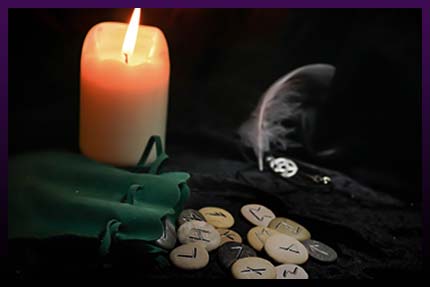 Uruz, Algiz means the object’s resistance. His vital force and immune system get frozen with the help of Isa to make him weak physically. Then, with Hagalaz, the person falls ill.

Nautiz is compulsion itself. It can bring the victim to any state. Sometimes, it serves as a vector of the hex.

Perth is the state the victim in brought in. In this case, it affects self-perception and self-esteem, causes complexes and chronic diseases. That’s how the hex affects the victim’s heath.

Thurisaz is a catalyst of negative changes. It’s also a barrier preventing the victim from resolving the problem.

Hagalaz is the hex itself, minor ailment, while Isa is temporary stabilization of this state.

(preamble) … Let (the man’s name) become the object of this hex.

Hagalaz… Let the object feel weak and tired. Nothing serious, but still unpleasant.

Isa… Let the object have this state for the next two weeks. After that, the hex will no longer influence him.

How to cast a hex using the runes

Don’t use your own blood.

Some hexes, such as a death hex, are cast by performing the ritual addressing Hel.

If you want to cast a temporary hex, don’t activate it by burning. If you active your hex by burning, it will be very difficult to stop it.

Preliminary diagnostics is recommended to determine if the object is protected with a protection spell.

Always remember about the law of equilibrium. Don’t try to cast hexes if you don’t need it. Besides, punishment should be proportionate to the crime.

The runes are straightforward. They will give you exactly what you tell them. For example, if you ask them to “remove the person from your life,” they will remove him physically. That’s why be careful while casting a hex.

I would like to warn you against casting runic hexes having no powerful protection.

Contact me to order any hex, including a runic one, or ask me to cast a protection spell on you.