The evil eye curse is a flow of negative information directed at a particular person and caused by such feelings as envy or anger. An evil eye curse can be put on a person accidentally. The victim of this curse may start yawning or feel not quite well or simply have a feeling that someone wishes him ill. People can protect themselves from the evil eye curse on their own. 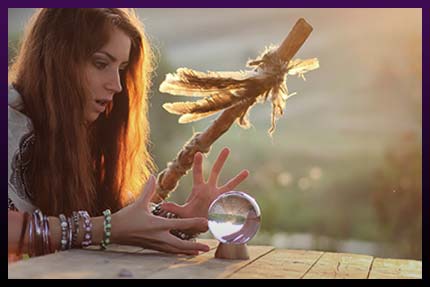 To do that, look in the eyes of the person who may want to put an evil eye curse on you and pronounce one of the following spells to yourself,

“Over a hummock and a snowdrift, passing the eye – straight to the forehead. Take the trouble away not to a friend, but to the enemy!” or “Go back to where you’ve come from.”

These are very powerful spells. Your enemy will feel the effect immediately and the evil directed at you won’t harm you.

All evil eye curse removal spells are casted with the help of water (which hasn’t been touched by lips).

Pour some water into a cup or a jar. Put a pinch of salt in it, light a match and, while it’s burning, cross the water with it three times, repeating (thrice), “In the name of the Father, the Son and the Holy Spirit. Amen.”

Break off the burned part of the match three times and throw the pieces into the water. Repeat the evil eye curse removal spell (see below) over the water 9 times. Sprinkle the victim with some water, saying, “In the name of the Father, the Son and the Holy Spirit. Amen,” and let the victim drink it. He should drink this water a few times a day.

“In the name of the Father, the Son and the Holy Spirit. Amen. Pure and heavenly blood! Save God’s servant (name) from any eye, bad hour, woman’s, man’s, child’s, cheerful, hateful, caused by an incantation”