THE TAROT OF THE MAGICIANS BY OSWALD WIRTH

Homepage Spellsbook Reading the Tarot THE TAROT OF THE MAGICIANS BY OSWALD WIRTH
By: Spellcaster Maxim
Esoteric, astrologer, writer

The number of newly created tarot decks was the greatest at the end of the XIX – the beginning of the XX century. It seems like tarot cards were all people wanted. Everybody wanted to know his future and have a deck of tarot cards. To be armed cap-a-pie. To know what to prepare for.

This is when the most popular mystical order in Europe was the order of Golden Dawn. Everybody knew about it, even though it was considered mystical,. Each member of this order had a variety of tarot decks and seemed to be competing with each other. However, not all of them achieved what they strived for. 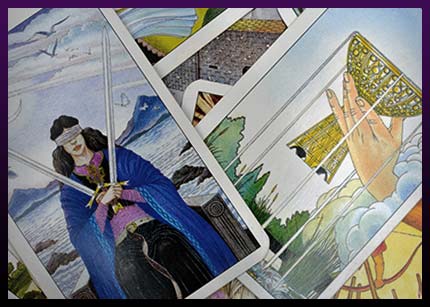 Oswald Wirth was an adherent of the order of Golden Dawn. He took an interest in magic when he was a child. Once he found a book where some disease-healing rituals were described. He read it attentively and decided to try it on his friend. To his great surprise, the ritual worked! Since then, Oswald had been waiting patiently for the moment fate would let him practice magic (his mother was a Catholic and wanted him to be one, too).

His mother dies and Oswald moves to France where he joins the mystical order. He knows he belongs here. He spends a lot of time reading books he couldn’t read before, acquiring centuries-old knowledge.  This is when he comes across the tarot cards. Back then, they were mostly playing cards popular in high society and people didn’t use them for telling fortunes.

Once Wirth saw an Antoine Court de Gébelin manuscript and after reading it decided to create true tarot cards (like those used by ancient priests) to be known to the selected few. The Cards of the Magicians by Oswald Wirth were almost identical to the ancient cards. The Major Arcana were almost the same as those of today’s classical cards, but the Lesser Arcana were hard to interpret. People were unable to draw their meaning without a special book that had commentary on each of the arcana. Unfortunately, imagination and intuition weren’t needed.

At the end of the XIX century, many people wanted to build themselves up with the Tarot cards and Oswald Wirth was one of them. As you know, all the future exists in the past. It was the mistake all tarot creators made. They all wanted to create something knew, but you don’t have to be famous to have people using your knowledge. You should be easy to understand. It is not what Oswald Wirth was.

If you put aside the vanity of this world, the solution will come to you by itself. Cards which are easy to use and understand are what most people want. It’s better to use a proven deck, rather than trying to figure out what new ones offer.