THE ORIGIN OF THE TAROT

Homepage Spellsbook Reading the Tarot THE ORIGIN OF THE TAROT
By: Spellcaster Maxim
Esoteric, astrologer, writer

Lifting the veil over the future, finding a way out of a difficult situation or an answer to a burning question, or simply getting predictions concerning the person you’re in love with… These are the wishes all people who believes in Higher Powers even a little have.

The tarot cards are powerful and dangerous at the same time. However, the deck poses danger only to those who use it without having proper knowledge. Before consulting a professional, find out about the magical power of these cards as much as you can. 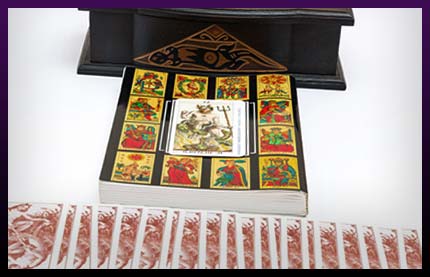 There are many legends about the origin of the tarot. The earliest records of the fortune telling cards with expressive images date back to the era of Ancient Egypt, the final period of its existence. The 3rd century BC was characterized by a growing number of new religious cults, philosophical doctrines, deities and methods of serving and contacting them. One of the ways to contact the other world was the tarot.

With time, the new religions and methods of divination sank into oblivion. When pagan cults started being persecuted, ancient rituals were forgotten, but never neglected. It seemed that the tarot cards were keeping a low profile waiting for the right time.

The Arcanum of the Moon

A tradition of spreading pieces of thick paper with images on them came to Europe at the beginning of the 2nd century CE and later acquired a status of a game of luck. The ancestors of the modern cards had 4 suits, but the tarocchi (as the cards were called in northern Italy) differed. The traditional game implies that the trump suit is assigned randomly – any of the four suits can become one, while the tarot had a separate suit of trump cards.

Printed decks appeared nearly a century after the tarot came to Europe, while spreading the cards became a universal fun.

The earliest records of the tarot being used in fortune telling date back to 1526. This is when Gypsies started moving into Europe, who made money on telling fortunes by spreading the cards for lonely hearts to tell them what to expect in future. This is also when a popular legend about the tarot appeared.

Many years ago, before the great end, the world was inhabited by extraordinary smart people who accumulated and carefully preserved all the knowledge they acquired. However, with time, the number of those who were unable to accept the world in its unity kept growing. Everything used for the benefit of the humanity could be used against it. This is when the supreme elders encoded the laws, philosophical ideas and brilliant technical inventions in 78 cards. They distributed those cards among wanderers who we now call Gypsies.

Two centuries later, in 1781, a Protestant pastor Court de Gébelin arrived at the conclusion that the simple card game is in fact the Book of the Thoth which contains secrets of the lost Egyptian civilization.

There’s another legend that connects the origin of the tarot with Egypt.

One Ancient Egyptian temple had 22 rooms with symbolic pictures on each wall. Some believe that the tarot originated from the Book of the Dead, which was sacred for all the Ancient Egyptians, while the images found of the cards initially decorated the burial vault walls.

It was Court de Gébelin’s genius apprentice Aliette who gave the tarot deck its modern look. Aliette was a barber who disregarded the deck’s mystical background and preferred to study the way one can tell fortunes using them. In 1783, Aliette adopted a pseudonym of Etteilla, opened his first fortune telling salon and expanded the use of the tarot. Any person could ask questions not only about love, but also business-related questions and questions about his personality, his past and future relations.

They started making the tarot cards in their new (present) form in the middle of the XIX century.