Based on the energy of orgasm, a sperm love spell helps women boost their beloved’s sexual attraction to them.

To cast a light sperm love spell, you will need your beloved’s sperm, your saliva and blood. When the moon is waxing, pour the sperm, saliva and blood into a clay cup and say, “My blood, burning and passionate, excites love in (your beloved’s name). Inflame the passions, make him think about me. Make him want me day and night, make him want to have me in bed when it’s cold and raining. Sperm, bring (your beloved’s name) to me. My word’s strong. So be it.” Add the mix to wine or cognac and give it to your beloved to drink.

To cast a more effective sperm love spell, you will need sperm, honey, a cherry twig, and two full-length photos (your photo and your beloved’s photo).

Mix a teaspoon of honey with some sperm in a cup using the cherry twig (never use a teaspoon for that!). With the help of the twig, apply some mix to the photo of your beloved (the area of his genitalia) and say, 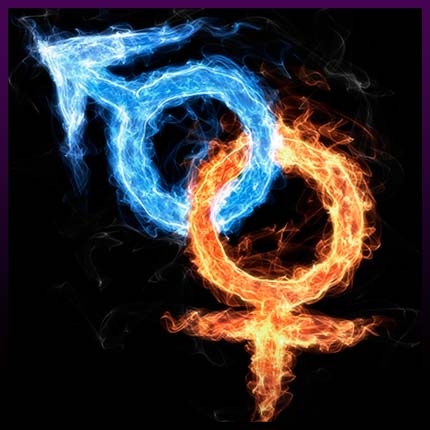 “The power of love, the power of passion, draw (the beloved’s name) to my home. You feel good here (step on your doorstep and apply some mix to it), you’re wanted here, here you’ll get everything you want. You’re fated to live with me, to be bound to me. Your passion’s here, your life’s here. You’ll suffer and be unhappy as long as you’re not living with me. My words are strong, bring me (the beloved’s name). My words are the law.”

After that, fold the photograph (face inwards) and put it under the doorstep. Continue the ritual. Apply the remaining mix to the genitalia area in your photo and say, “The way you (the beloved’s name) love me, so you spilled your semen into me. Your passion’s growing, pushing you to me. (The beloved’s name), burn with a bright fire, incredible desire. Want me like you never wanted anyone. My image is everywhere, in the mirror and in the water, in the air and on the ground, day and night, long for me and love me. My word’s tying you and no demon can untie you.”

Hide your photo under the doorstep or near your beloved’s home.


You can order more effective rituals including sperm love spells from me as part of my spiritual service.

My readers have been wondering lately if I offer a sperm love spell or if they can cast this spell on their own. Well, I believe it is time to answer some of the most interesting questions about sperm love spells. That is what I am going to do right now.

Where do I get the sperm to cast a sperm love spell?

There are some sperm drops left on the bed but it’s dry. Can I use it in the ritual?

Yes, you can. However, there is a good chance that you will fail. Besides, to use the sperm left on the clothes or bed linen, you are going to have to sacrifice them. Cut out a square making sure the sperm is in the middle and use this piece in the ritual.

You cannot use the whole thing with the sperm. This thing carries too much of your energy which may interfere with the ritual.

Can I use my bedsheet after I did the laundry?

No. It will bother Higher Powers for no reason and next time they may refuse to help you at all.

While we were having sex, the man’s sperm mixed up with a drop of my menstrual blood. Can I use this sperm in my sperm love spell?

No way! All rituals engaging blood, especially menstrual blood, are incredibly dangerous. Above all, they are dangerous to you. If something goes wrong, the price for your mistake will have to be paid by your future children or with your health. For example, you may become infertile.

They say sperm rituals may cause impotency in men. Are you sure it’s safe to tell people about it?

You are confusing a sperm love spell with revenge spells. Sperm is not what determines the effect of the ritual. It depends on the branch of magic and the ritual itself. Of course, if you try to cast such a spell by yourself having zero experience in magic and no magical abilities whatsoever, you can wrench the spell turning it into a curse. But if you let me do the work, my spell will give you exactly what you want.

To dispel all your doubts, I would like to remind you that one and the same hammer can be used to build a nice house and to break the windows in the house of your neighbor.

I have some sperm. It’s my boyfriend’s. It’s been a while and it seems darker than before and smells badly. I guess I can’t use it anymore... or can I?

Will you use spoiled ingredients to cook a romantic dinner? I do not think so. Similarly, you should not use spoiled sperm in your love magic rituals. So please try to get some fresh sperm.

How can I get some sperm if I haven’t had sex with the man I’m in love with?

Well, obviously the easiest way is to offer him to have sex with you. I do not see any other options.

Can I use the sperm left after the man had sex with another woman?

It is a difficult question. I need to know more details to answer it. For example, who is that woman? Does the man have any feelings for you? How did you get the sperm in the first place? So get back to me with the answers and I will give you mine.

Can I use the sperm left after oral sex?

Since some women manage to get pregnant this way, then the logical answer should be yes, you can. However, this sperm is okay if it has very little saliva and if you know for sure you have not swallowed any of it.

What about the sperm left inside of me?

I would not use it in the ritual. There is too much of your energy in this sperm. Next time try to get the sperm left on your legs or on your stomach.

How do I store the man’s sperm to use it in a love ritual?

If you have it in the condom, tie it up and put it in the fridge. Do not freeze it as low temperatures destroy the energy of sperm. If you have just one drop, soak it up with a tissue without spreading it over the tissue. Fold the tissue, wrap it in film, put it into a container, and close the container tightly. Keep it in the refrigerator as well.

Is it true that sex without a condom (which allows the sperm to get inside the woman in many different ways) influences the man like the strongest love spell?

No, it is not true. Men like having sex without wearing a condom. It boosts their confidence and makes them feel proud of themselves. But this pride is bad. To bind a man to yourself to build a strong and long-lasting relationship, higher chakras need to be involved. So the method you described does not work.

However, this may influence the woman, provided she does not feel scared or disgusted when the sperm gets inside her body. Her positive emotions are what turns unprotected sex into an effective magic ritual.

My boyfriend has some serious prostate problems. Is his sperm good enough to be used in a sperm love spell?

The root cause of all diseases is charka problems. In this case, your boyfriend’s prostate disease indicates some problems in his root energy center, that is, his first charka. In this case it is rather difficult to put a love spell on the man. To begin with, you need to treat his malfunctioning chakra before the love spell is cast. So I suggest that we do as follows: you order my comprehensive love spell and I cure your boyfriend’s energy illness along with its physical symptoms and then put a love spell on him.

As a matter of fact, this applies to all love spells to be put on sick men, no matter what the disease. First and foremost, the spellcaster needs to restore the malfunctioning chakra, then cure the physical disease, and then perform the required ritual. Otherwise, a love spell put on a sick person makes their condition worse turning into a curse.

Can a sperm love spell be put on an underage person?

I never cast spells on underage people, making no exceptions. To find out why, please watch the video attached to this article.