HOW TO CAST A MONEY SPELL

Homepage Spellsbook Money spells HOW TO CAST A MONEY SPELL

Facing money problems, people start looking for extra sources of income, such as a second job, profitable investment plans, or renting out a room. Anyways, this won’t help them make a somewhat significant sum. To improve your financial situation, try to use a money spell.

If you think it’s a waste of time and quackery, you’re wrong. Magic has been developing for ages and money is a great source of energy. Money travels from one person to another and stays only with those who have a particular energy range. This explains why some people earn a lot of money without having to work hard, while others can’t have both ends meet no matter what they do. So, a money spell can help you adjust your energy and improve your financial situation.

Who should cast a money spell 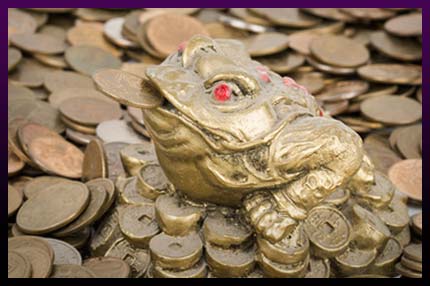 In ancient times, all rituals were performed only by experienced shamans and sorcerers. Spells cast by regular people were believed to yield no results.

Nowadays, a money spell can be cast by any person. To cast a money spell successfully, it’s important to believe in what you do and observe all the rules.

To increase the effectiveness of a money spell, a talisman can be used. The talisman will keep the energy potential. Any object can be a talisman. Preferably, use a small flat ornamental stone (for example, an emerald). It will be convenient to wear and keep. The ritual should be performed at night, when the power of the energy streams increases. Take your talisman, some water, a handful of ground and a coin, and come up to a light traffic road (such as a path in the woods or a rural road). Face the moon and imagine that you have enough money.

Take the coin in your hand, sprinkle it with some water and ground. Make a ball of it, put your talisman on top and say,

“The ground is a conductor, the talisman is a magnet, let it draw money to me.”

Repeat thrice. Take the coin out and throw it away. Wash the talisman with water and put it in your wallet. Naturally, you won’t notice the results right away. Your financial situation will improve within a month. Carry the talisman with you. Never let other people touch it because it can lose its magic properties and you will have to perform the ritual over again.

Aside from white magic, there’s black magic. Professionals warn people against using black magic because it’s fraught with consequences. Speaking about money, there’s a good black magic spell to improve one’s financial situation. It must be cast during the waxing moon. Otherwise, it will prove useless. Take a needle, thread, candle, black cloth, and several banknotes (the same side up). Spread out the cloth and put the banknotes on it. You don’t have to use high denominator notes. Just make sure you use soft money.

Light the candle and drop some wax over the notes (make sure the wax drops glue the notes together). Crumple the notes and the black cloth, and tie it with the thread in a way so the notes don’t stick out. Dig a hole and put the bundle in it. Bury the bundle and sprinkle it with some water, saying,

“The seed is germinating in the ground, money is coming to my wallet.

Your financial situation will improve shortly and you will realize that money is drawn to you like to a magnet. Make sure nobody digs the bundle out, or you will have to perform the ritual over again. Strong money spells are rather difficult to cast, so they should be cast by professional spell casters. However, regardless of how strong your money spell is, you should do something too to become financially independent. For instance, you should start playing the lottery, find a new job, ask for a promotion or start your own business.

If you’re facing money problems, contact me and I will cast a money spell to ensure your well-to-do life.