Aleister Crowley was one of the most famous mystics of the XX century. He lived such a hectic life that he broke off not only with those who didn’t approve of his attitude towards mysticism, but also with his closest followers.

When the world learned about the tarot deck, the civilization that created it, had been long gone. Crowley was the first to restore this knowledge. However, he decided to create a new deck which differed from the decks which were then popular in Europe. He applied to an unknown artist-Egyptologist Frieda Harris (after which she won recognition as a painter). 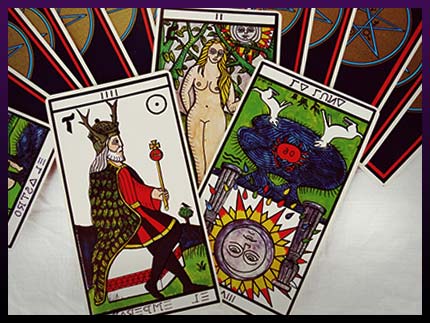 The tarot cards created by Crowley and Harris used to be very popular. They were believed to be able to predict people’s future, including what will happen to a person after just a few seconds after the fortune telling session is finished. Based on Ancient Egyptian symbols, often complicated ones, they were sometimes used to throw dust in the eyes of the uncorversant.

The Thoth cards are good fortune tellers, but not many people can interpret them correctly. The pictures on them don’t mean anything to a person who comes to a professional fortune teller, so he has to have to full confidence in him. Crowley knew his cards well, but his apprentices didn’t, so they often made mistakes while telling fortunes, which undermined the authority of these cards greatly.

Cards from the Thoth deck

The Thoth deck created by Crowley features so many symbols that it makes it difficult to interpret. Although they are really good and precise fortune-tellers, their interpretation is available only for those who can fall into a trance and see the prediction “with their own eyes” (speaking figuratively, of course). Otherwise, the card reader has to know the meaning of the Ancient Egyptian symbols and this is not something they teach children at school.

Today you will hardly find a deck of the Thoth tarot cards in stores. Maybe, you will find it on the Internet (and it will be very expensive), but in this case you will also have to find a manual to be able to interpret their meaning. It is a complex task, isn’t it? Working with any kind of cards is a ritual. Working with the Thoth cards requires special training, knowledge, or advice from someone who will be able to help you handle these cards’ energy.

It is believed that every time Crowley was about to tell fortunes using his cards, he pronounced a spell in the Ancient Egyptian language. If translated into English, it sounds as follows,

“Forces in the Highest, dark and light! Unite together, become a whole, and show me the way to perfection!”

The Thoth cards are very powerful and can be demanding. Are you ready to give up something, that is more important to you than life, in exchange for knowing your future?