At the end of the XIX century, in Great Britain, there appeared a mystical order of the Golden Dawn. Later, the second (inner) order of the Ruby Rose or Cross of Gold was formed. Members of this order were only leaders studying most famous mystical teachings. Based on the work of the famous Ancient Egyptian priest Hermes Trismegistus, the order was named after him (the Hermetic Order) and so were later the cards they created. 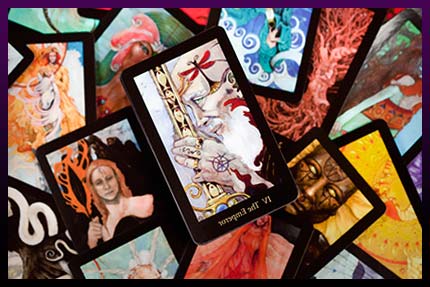 The hermetic tarot preserved all the core symbols, but they have so many extra magical symbols and angels’ writings adopted from cabbala, that for a non-professional it’s almost impossible to understand their meaning fully. The Lesser Arcana have no hints for a subconscious whatsoever. They only feature a certain number of symbols. For example, if it’s a 7 of Swords, you’ll see just a bunch of strange symbols and hieroglyphs. So without a special manual at hand, it will be hard for you to turn your intuition on and figure out the meaning of the Arcanum.

Those who created the hermetic tarot deck believed that cards should always be back-and-white. They were confident that colors prevent those using them from understanding their meaning correctly and dull their intuition. They were mistaken. Think about prophetic dreams. Those who see those dreams see them in color. Even people’s aura is unique in its color.

Members of the hermetic occult organization referred to the fact that white is the foundation of everything, while black is needed for a contrast.  But don’t forget that white is what you get if you blend all the seven colors. And each color is our mood, character, or wishes. So to use your intuition, it’s important to use the right color combination.

Each card of the hermetic tarot deck is outstanding. No other deck has cards so rich in mysterious symbols.  But these symbols also mislead people, preventing them from seeing their true meaning. It turns out that, trying to create the perfect and most popular tarot deck, founders of the order of the Golden Dawn created another utopia.

As a rule, people, who didn’t study ancient books on occultism, lose interest in the hermetic deck after a few vain attempts to use these cards in fortune telling. They usually return to the classical tarot, which are easy to understand and, even if the arcana are hard to interpret, the pictures are not.

Life is short, so do you really want to waste your precious time trying to figure out how the hermetic deck works? Don’t you think it’s better when it’s simple? Do you really want to stare at the cards spread on the table in confusions, not knowing what they can mean?  Let the professionals do it (not all of them can though, especially those who studied a certain area of magic, but not the occult magic in general).