Homepage Articles Amulet An amulet in Islam if you want to avoid contact with black magic
By: Spellcaster Maxim
Esoteric, astrologer, writer

How to choose the right amulet in Islam?

Traditional Islam is quite tolerant to magic, so true Muslims are allowed to use an amulet in Islam and they are wearing amulets in Islam without worrying that they might break some laws. A true Islamic amulet has the following properties:

The one the amulet belongs to is a kind person who never does evil to other people.

Is wearing amulets allowed in Islam? It is, if the amulet meets the above listed criteria. Some people may disagree with me but I am talking about an ancient tradition which goes back centuries. The initial doctrine of any esoteric teaching states that a person is in favor with Higher Powers not for strictly following some rules, especially modern ones, but for constantly working to purify their heart of evil. An authentic amulet in Islam is a tool enabling people to purify their energies and the world around them from evil, so it cannot be out of favor.

Speaking of wearing amulets in Islam, it is one thing when an amulet makes other people suffer or is used to fool or humiliate others, and it is a different thing when an amulet is used to fill you with light and purity, giving you eternal kindness and patience. Is wearing amulets allowed in Islam? I guess the answer depends on the type of the amulet you want to wear.

As you know, we influence the world with the energies we radiate. Authentic Muslim amulets help people radiate only light energies which cannot but be approved and considered right by Higher Powers.

I, spellcaster Maxim, am not trying to talk you into buying an amulet and wearing it. It is for you to decide. I just want to express my opinion regarding this never-ending argument between the supporters and critics of Islamic amulets. By the way, those who are against it or threaten the people who wear even the generally accepted “good” amulets with terrible punishment, are expressing their personal opinion too, which often contradicts the sacred texts.

Thus, you should understand that some amulets are allowed for use and others are not allowed for use, and I am going to tell you about the “good” ones.

What is the right way for wearing amulets in Islam? 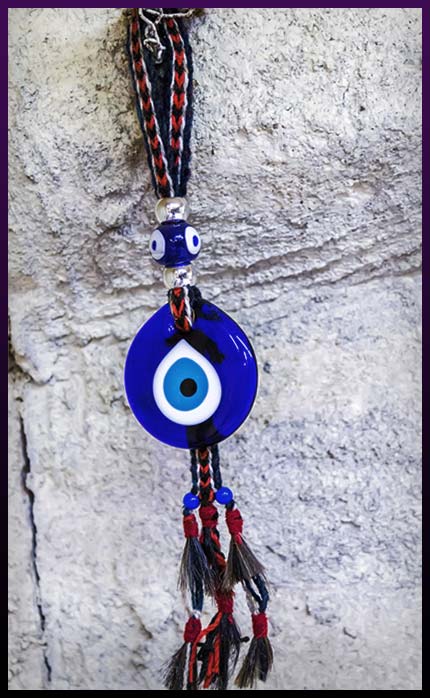 I have outlined the main features the right amulet in Islam should have. Now let me elaborate on each one of them.

The amulet should be manufactured by a Muslim worshipping Allah. It means the magic practitioner should believe in Allah as the only possible protector. It explains why protective products should not be purchased from black magic practitioners or atheists. Their amulets and talismans help you by stealing other people’s energy and consequently causing damage to them.

The amulet should have some words or quotes from sacred Muslim books. A quote from the Quran or another sacred text is what can make an amulet powerful. Your faith and pure heart will make your amulet even more effective. However, the amulet is still just a conductor of your energies.

The amulet has to be designed to do good or for protection. An authentic Muslim amulet must not be used to get back at or to humiliate others. It is never designed to do evil. Its goal is to protect you, cleanse you and make you better. Do not wear your amulet if it fails to meet these criteria.

The amulet should not be a symbol of greed or ambition. A lot of people prefer expensive magic accessories made of gold, platinum and gemstones, and occasionally from the skin and bones of unborn animals or the endangered species. The production cost of an amulet has nothing to do with its effectiveness. It has to do with your pride. Those are not good motives to use an amulet. Your amulet should be simple and modest because it is not a piece of jewelry but something that allows the power of Allah to reach you. This is the way it works.

Many amulets are made from things or animal parts symbolizing evil, darkness and negative energies. Thus, people are prohibited from wearing amulets in Islam if they are made of the wings of a bat, objects brought from a cemetery, dead animals, as well as the teeth and fur of dogs, wolves, and other predators. Avoid amulets containing human hair or nails.

Is wearing amulets allowed in Islam if they are made of white cloth put inside a simple but strong case? It is. There are no exceptions to this rule.

the amulet should be consecrated with white magic rituals. Amulet consecration is performed following personal purification and praying.

The one the amulet belongs to is a kind person who never does evil to other people. Your white magic amulet in Islam will not work if you radiate negative energies. Your amulet will wear out fast or transform from a source of light and wisdom into a source of evil and destructive silliness. So before you make a decision regarding wearing amulets in Islam, try to evaluate yourself objectively. Your amulet will get you closer to Allah. As a result, Allah will not only support you more but also expect more from you. Is wearing amulets allowed in Islam? Yes, but that is the price you will have to pay if you break your amulet killing the good it has in it.

Is wearing amulets allowed in Islam for non-Muslims?

Many people are quite narrow-minded. They build some limits around themselves keeping them from accessing the miracles. Thus, a lot of people believe they can benefit only from the amulets conforming to their religious beliefs and cultural traditions. In extreme cases, it leads to racism and xenophobia. In everyday life it is the reason people cannot be happy. It is like refusing to eat dinner because it was cooked by a representative of a different race, or refusing to be treated by a doctor who was born in a foreign country.

The amulet in Islam can be helpful for anyone, provided they are kind and nice people wearing amulets in Islam made in full compliance with the above specified requirements. Is wearing amulets allowed in Islam? Why would it not be? God is kind, patient and wise and is willing to help everyone who is asking for it and showing that they deserve it in their everyday life.

Amazingly, it applies not only to the amulet in Islam. Almost all magic amulets and talismans require their owners to follow some rules. Otherwise, they refuse to help them. Thus,

Creativity amulets do not help people wasting their time and energy;

Love amulets are useless for selfish or unfaithful people;

If you are wearing amulets in Islam to get smarter and wiser but do not do anything to improve your brain power, your amulets will prove useless;

Good luck amulets do not help those taking advantage of other people’s ill luck and failures.

Protective amulets stop working if you are the first to attack.

I, spellcaster Maxim, am confident that there are more good people than bad ones in the world. There are more people striving for light than those willingly serving evil. Is wearing amulets allowed in Islam? It is and I am sure you can benefit from such an amulet too and see it fill your life with happiness and joy.

If you are not sure you qualify for Muslim amulets, visit my website and choose any other amulet that you think better suits you. The rest of you can watch a short video that I made to help my readers select the right Muslim amulet.