I have recently published another article about Pagan love spells. To read it, click HERE

In case you want to get a quick idea of what these spells are without doing any research and wasting your time, I would like to begin with saying that almost all magic spells are Pagan. The word “Pagan” refers to someone who lived in a certain region before the religion that is currently dominating in that region prevailed. So some people believe a Pagan spell is any spell created before Christianity was adopted. In fact, it is not true. Pagan spells are spells which are designed to engage not angels or demons but various ancient forces, including: 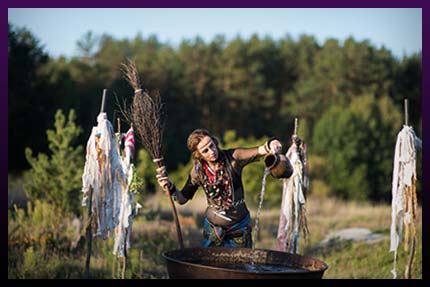 All Pagan love spells are quite poetic. All objects, phenomena and stars are referred to as having some human qualities. The moon is a sister. The sun is a mother. Wind is a kind uncle or father. No matter what patron is chosen, the spellcaster trusts his fate with it, accepting its help and the fact that it is not for free.

Unconditional fatalism is one of the main disadvantages of using Pagan spells for love. Ancient people who were very close with nature, believed there is some powerful spirit behind every phenomenon. They were able to see those spirits and create them. For example, women who had to go to a spring every day to get water were able to create a female spirit which ended up living near this spring. This spirit, provided it was a kind one, was able to protect the spring from drying up. If the spirit was evil, it could drown random strangers and children in the spring.

As a result, people ended up being surrounded by many spirits which lived in their homes becoming bogies and harvest protectors. They were able to help people with their Pagan love rituals in exchange for food or the energy of the person asking for their help, so their rituals were very effective. The key was to ask them for help and accept it when it was provided.

But today such spirits are basically non-existent. Yet, our world is not empty either. Instead of those spirits which were neutral and mostly friendly, now the world is filled with evil entities which surround almost every person today. So when you try to perform ancient rituals, you call up not the spirits of the mountains or fields or spirits which protect homes, but various emissaries from Hell which cannot wait to make people suffer.

For this reason modern sorcerers prefer to avoid the Pagan spell for love. However, today there are several branches of magic which are trying to use ancient rituals. They are practiced by:

Shamans living in the north;

Wiccans. However, I have already told you in my previous article that Wicca is not a real branch of magic and its spells and rituals cannot make people fall in love with each other. 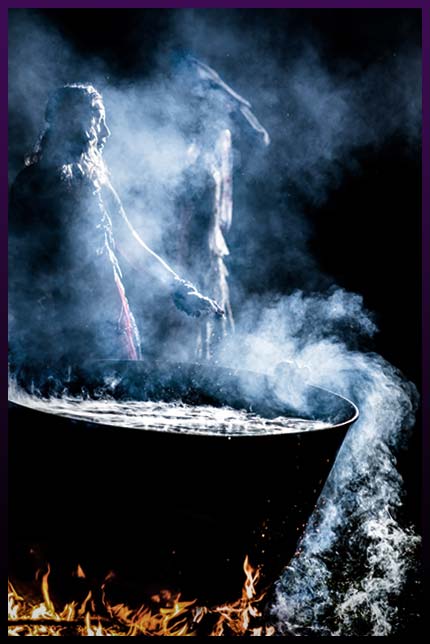 Pagan love spells become popular every 10-15 years. The world is cruel and people who do not accept cruelty always look for something idealistic in other worlds or in other times. For some reason they think ancient magic which is based on collaboration with natural spirits was white magic, so its spells are harmless and make people happy.

But once you start studying magic, you realize that most cults and ancient rituals which have survived into the present were quite cruel. Almost all shamans, healers and sorcerers used to make sacrifices, including animal sacrifices, which makes it absurd to call such rituals white magic.

Besides, you should remember that in ancient times there was no such thing as Pagan love spells for beginners. No one taught anyone how to cast spells and all rituals were usually performed by very experienced masters of the art of magic who had been improving their skills all their life. On rare occasions witches taught women how to cast love spells when they asked them for it. The witch would provide the woman with everything she needed, including tools and ingredients she produced herself. She also prepared the woman and the target of the spell, told their fortunes and prepared their energies for exposure to magic.

Today even if you prepare someone for one of the simple Pagan love spells, you will still face the problem I described earlier. Natural spirits are not what this person will call up. The spell will call up evil demons which can never make anyone happy.

When they have to help you cast a spell, they take possession of the target’s body. As a result, this person loses control of their wishes, thoughts and dreams. Without it, they lose control of their life. People may stay possessed for many years. For example, the other day I happened to work with a man who became possessed when he was twenty two years old. When he came to me, he was fifty. It means the man was tortured by that demon for almost thirty years. Moreover, the woman who put that spell on him left him in two years, so the rest twenty six years he was controlled by that demon were for nothing and the man never became happy, rich or successful.

After I treated him, I wondered what happened to that woman. I ran a special diagnostics of her fate and learned that she never became happy either. She was married twice but the men left her shortly after the wedding. She tried to get pregnant but every time she had a miscarriage. She is still very unhappy. By making my client possessed, she changed her karma and has been paying for it ever since.

Real Pagan love spells may have such effects on people’s lives, so they should always be handled with caution.

“What is the easiest Pagan spell?”

The easiest Pagan spell is cast in the following way. Whisper a spell over your personal thing, such as a ring, piece of one of your favorite clothes, or a lock of hair, and leave it at the house of your target. This object will create a portal allowing you to communicate your wishes to the person you love and make this person love you back.

“Are there any special days when Pagan love rituals should be performed?”

Of course. I think you can even find a calendar on the Internet specifying which days are good and which days are bad for Pagan magic. These days are different for different branches of magic. If you fail to find such a calendar, just remember that all love rituals should be performed when there is a waxing moon.

“Is Pagan love magic a branch of magic for women?”

It depends on the branch of Pagan magic. It is true with regard to ancient Slavic magic and North European magic. Their ancient priestesses were in charge of love and household magic, while priests specialized in money and health spells. If you are talking about Indian magic, I suggest working with male magic practitioners as they tend to be more skilled and better qualified.

“Can I put Pagan spells on a picture?”

No, because that way you will turn an ancient ritual into a modern one. Instead of pictures, use the target’s hair or clothes. If the target’s image is required, use a clay figurine or a drawing made with a piece of charcoal on leather or bark.

“Is there a way to avoid making an animal sacrifice?” 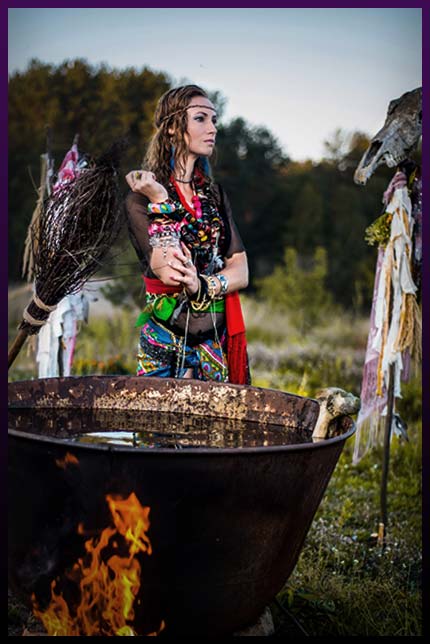 Unfortunately, no. This is another big problem. Killing a chicken to make some soup and killing one to make a sacrifice are two different types of murder. When you sacrifice an animal to perform some ritual, you put a murderer’s curse on yourself and stain your karma. Besides, you will end up collaborating with an evil demon while being bound to it through the sacrificed animal’s blood, so you will never ever be able to get rid of that demon, and such collaboration can have terrible consequences.

“What is the best way to tell fortunes in Pagan love spell casting?”

This fortune-telling ritual is performed in winter. Bring some water from a river or a lake in a deep dish. Attach pieces of paper with the names of your candidates to the edges. Put a tree twig into the dish sharpened on one side like a pencil. Start stirring and then see who the sharp end ends up pointing to. This is the person you can be happy in love with.

“What spellcaster should I work with if I need a Pagan love spell?”

There are two answers to your question. The first one is you should select the one who better fits your culture. The second one is choose the one who is more powerful, because high-quality love spells can be cast only by powerful magic practitioners.

“If there are no spirits of nature left, who do Northern shamans work with?”

They still work with natural spirits. In areas where representatives of various Pagan cults live, you can still find some natural spirits. By the way, this is the reason why Pagan love spells cast by shamans give such great results.

“Can I protect myself from Pagan love spells that work?”

“Some Pagan rituals are performed while under the influence of drugs. Why?”

Ancient people considered drugs to be the best way to alternate one’s consciousness and release energy. Hence such advice. But modern magic practitioners try to avoid drugs. First of all, today the world is full of evil creatures, so they should always stay alert and keep a clear head. Secondly, modern sorcerers are familiar with much safer and more effective methods to cast spells without putting themselves in danger.

“I want to have a Pagan wedding ceremony. Do you think it’s a good idea?”

A wedding has always been considered one of the most important events in life and required a more complicated ceremony. The better the ceremony, the happier the spouses could be in the future. Pagans believed that the true mission in life was to continue life through children for their Gods. So a typical Pagan wedding ceremony consisted of the following steps:

- Arranging a marriage (usually by the parents or other older relatives);

- Bride show (to evaluate how beautiful, smart and healthy she is);

- Discussing and agreeing on the dowry;

Sometimes they agreed on “kidnapping” the bride and the groom was supposed to pay a ransom to her father. They would bake special bread with symbols of fertility or a meat pie as a symbol of prosperity a few days before the wedding. There are many more Pagan wedding traditions, but today almost all of them are unhelpful. If you want your wedding to be special and memorable, have a Pagan wedding ceremony.

“Can Pagan love rituals bring together people from different cultures?”

Yes, if the Pagan love rituals are performed by an experienced shaman or magic practitioner. However, modern sorcerers will not cast such spells. Magic has advanced greatly over the last few centuries and modern rituals bring much better results than old Pagan spells.

“Still, will you tell us how to cast a Pagan spell for love?”

Find it out from my video about Pagan magic and Pagan love spells and also get a better idea of how such rituals are performed.