The origin of the tarot is unclear. However, it’s commonly thought that the first tarot deck was created in Italy in the XIV century (although it might as well have been created by the Indian Gypsies or Celts). In fact, the tarot adopted ideas and images of all cultures, religions and ancient myths, as well as astrology. The cards are very symbolic and help people access subconsciousness (both their own and that of the people around) and predict their future.

The Arcanum of the Magician 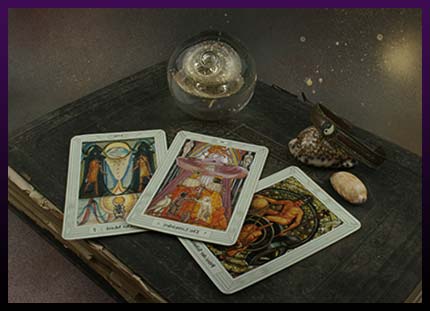 The classical tarot deck consists of 78 cards and is divided into Major and Lesser (Minor) Arcana. 22 Major Arcana cards are illustrated cards (known as trump cards). They are symbolic. The remaining 56 Lesser Arcana cards are regular playing cards. They are divided into 4 suits with 14 cards each suit (4 cards with figures and 10 cards without figures, enumerated from 0 to 10). The Major Arcana represent the phases of our life, from innocence and naivety of the first card – Jester – to the feeling of completeness and fullness of the last card – World. The Lesser Arcana are divided into four suits: Wands (alternatively, batons, clubs, or staves), Cups, Swords, and Pentacles (alternatively, coins, disks, or rings), which symbolize the four main aspects of life. These cards are the ancestors of the modern decks of playing cards we know today, but the suits are named differently: spades, hearts, diamonds and clubs.

Medieval Italians used the tarot to play the game of Tarocchi. They used figureless cards the way we use them today and the Major Arcana cards were the trumps cards. Anyway, I wouldn’t recommend you to use the tarot for playing card games because it’s not what they’ve been designed for. The vibrations will disappoint you if you don’t treat them with due respect.