When you hear “Egyptian tarot deck,” you think about some ancient Gods who can tell fortunes and show a way out from any unpleasant situation. Today we know that the Egyptian tarot cards are a mere mystification.

These cards were invented by Antoine Court de G é belin to astound Franklin whose potential he was aware of long before he founded the United States. 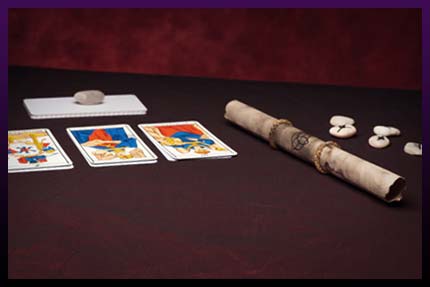 These cards include ancient symbols of Egyptian heritage. Back then, they started to study the famous pyramids. Symbols drawn on the wall still fascinate people. Only scientists are capable of decoding them. At the end of the XVIII century, they were so valued by Europeans that some of them made good money on them.

Cards from the Egyptian tarot deck

The Egyptian tarot cards were popular in masonic communities. Wealthy people who were part of these communities believed that the cards could not only tell fortunes but also change it. Yet they weren’t systematized and had no meaning. Symbols used in them didn’t always coincide with the meaning those cards had. The fortune teller could say anything, and the people believed him so much that they did exactly what he said, not thinking about the consequences.

Ancient Egyptian priestesses had special golden cards. Each card was a gold bar with an engraving. Each pharaoh had his own deck that was hidden in the pyramid after his death. These cards were never called tarot cards. They were called the Finger of God cards. In Ancient Egypt, people believed that these cards told only the truth. They were used rarely, always before important battles. The priest would spread the cards to warn the pharaoh about the outcome of the battle. The deck contained not 78 cards (like today’s tarot), but 18. They were never shuffled as it was simply impossible. It should be noted that the symbols engraved on the true Egyptian cards are not the symbols G é belin used.

Today these cards are hard to find. But that’s good! Not only were these cards created by a fraud who just wanted some money and recognition, but also each symbol has its meaning which after a while comes true.

All cards can tell fortunes, including the Court de G é belin deck. But if you are going to use one, you will have to spend your whole life trying to figure out what each of the cards means. Otherwise, you can throw them in the garbage.