The Book of Curses, Part 1

Curses are special spells which cause damage, troubles, diseases, or death. Being one of the most dangerous forms of magic, curses are used all over the world. They are put for vengeance or to influence someone, and to protect homes, treasures, graves and cemeteries. Curses take effect either immediately or after a few years. Curses can be put on a family, causing troubles to many generations.

A curse can be put by any person by simply expressing that he wants some particular person to have troubles. The power of each curse depends on the state and social position of the one putting it. It is believed that curses put by authoritative people are more powerful and therefore more dangerous (such as priests, priestesses or royalties; witches, sorcerers, magicians; people for whom magic is the only option: women (in some societies), poor, sick or terminally ill people. Curses pronounced by a man on his deathbed are most powerful, as all the energy of this man goes into his curse. 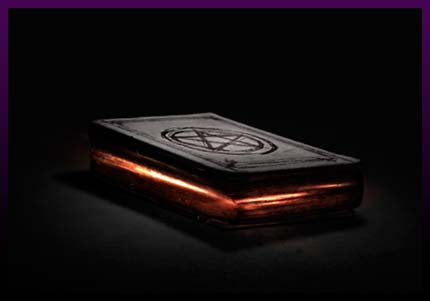 If the victim knows about the curse and believes that he’s doomed to die, the curse gets more powerful, as the victim himself brings closer the day of his death. It’s called sympathetic magic. However, witches and sorcerers claim that curses are as effective without their victims knowing about it. Many claim their victims never know about having been cursed, so that another witch couldn’t break this curse.

Just as blessings, a curse calls for supernatural powers to do something to change the situation. It is your inner intentions that make it a curse or a blessing. The exception is neo-pagan witches and sorcerers who have a long history of using both blessings and curses, whether to express their gratitude or take vengeance. Plato says in The Republic, “If anyone wishes to injure an enemy; for a small fee they (sorcerers) will bring harm on good or bad alike, binding the gods to serve their purposes by spells and curses.”

People, who suspect to have been laid a curse on, can ask this very witch or sorcerer to destroy it for money, or they can go to a different witch to have the curse removed. If that is the case, the two witches can start a fight to find out which one has stronger magical powers.

Perhaps, one of the most popular curses is a curse with a figure or a picture of the victim. Wax figures used to be very popular in ancient India, Persia, Egypt, Africa and Europe. Some of them are still used in magic. Figures can be made of clay, wood or cloth (rag dolls). Wax figures are painted or marked. Sometimes, something that is connected with the victim (a lock of hair, nail clippings, bodily fluids, cloths or even shoe dust) is attached to the figure. Then the figures are melted or burned down. While the figure is melting or burning, the victim suffers. When it’s gone, the victim dies.

Egyptians often used wax figures of Apep, a monster and the Sun’s enemy. The magician wrote Apep’s name with green ink on a figure, wrapped it in papyrus and threw into a fire. While the figure was burning, he hit it with his left leg four times. Then he mixed the ashes with feces and threw it into another fire. Besides, Egyptians would put wax figures into tombs. In Europe, wax images were very popular in the Middle Ages and during the Renaissance. Many witches were accused of using them to lay on curses. James I, the king of England, in his Daemonologie (1597) describes the way witches caused diseases and death by melting wax figures.

According to him, the devil taught some to make images using wax or clay. When these images are put on a fire, the people they depict and whose names are written on them get sick and then die. They can enchant and take lives from men and women by burning their images. Perhaps, they do it for their Master. Even though this tool can’t be reused, if it’s not done properly, when the curse is put on the victim and his wax image is melting, his spirit weakens. On the other hand, since there is no concord among the spirits, which cause indigestion so strong that it weakens his internal organs, the body becomes so weak that it can’t accept food which after a while leads to death. It happens after the image is destroyed by fire.

Instead of melting, a magician can stick pins, needles or knives into the figure. Figures can be replaced with the hearts of animals or people. Hearts, animal carcasses or objects which decompose quickly are dug into the ground; the curse specifies that the victim should die once the object decomposes.

In Ireland, “curse stones” are stones which are stroked and turned counterclockwise, while the curse is being put. Some say precious and semiprecious stones can transmit curses. Thus, it is believed that the diamond Hope Louis XIV purchased in 1668 was cursed because all of its owners got sick, were unhappy and died quickly.

The Mummy Curse of Tutankhamun is one of the most well-known curses. When Earl of Carnarvon and Howard Carter discovered the tomb of Tutankhamun in 1922, they found a clay tablet running that “Death will slay with its wings whoever disturbs the peace of the pharaoh.” Six months later, Carnarvon died of an infected mosquito bite. Even though six of the seven principle members of the excavation team experienced strange or sudden deaths, thought to have been the result of the curse, the tablet was never photographed and strangely disappeared from the artifacts. Bob Brier, an American parapsychologist and Egyptologist, speculated the tablet never existed. In Ancient Egyptian Magic (1980), Briar notes that it is not typically Egyptian to write on clay tablets or to refer to death as having wings. Also, no other reliable sources exist that cite the curse.

Various legends abound in the United Kingdom and Europe of curses put on families, especially of the aristocracy. One of the most horrible curses was that of childlessness or death to the heirs, to the family lineage died out.

In the various traditions of neo-pagan witchcraft it is against the ethics and laws of the craft to lay curses (see WICCAN RULE). Most Witches abide by this, thinking that the curse will return to the curser in the same form as given (see TERNARY LAW OF RETURN). Although there are those like SIBILA LIK that believe that cursing against one’s enemies is justified. Witches from ethnic cultures such as the Italian STRIGA, the Mexican BRUJA, and branches of the Pennsylvania Dutch also believe that cursing is justified. 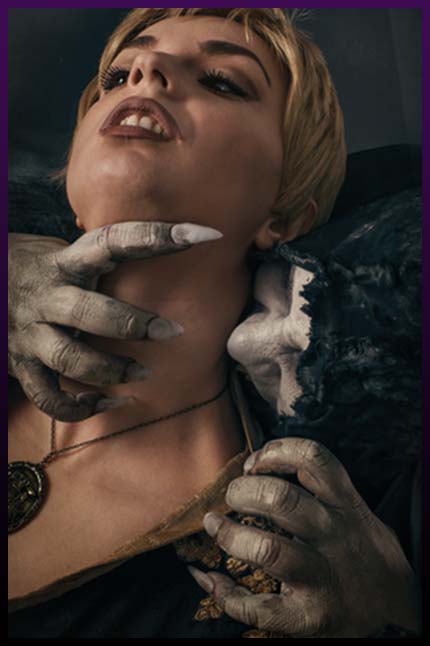 Just as many methods exist for breaking cursers as there are for making them.

Exorcism is popular in neo-pagan witchcraft. They say that certain amulets can protect from curses. Lizards’ blood mixed with various herbs has protective features, too.

Burning a nettle-stuffed rag doll which has the name of the curser written down on it (if it’s known) can also break the curse.

Curses can be broken with oils with rosemary; there are also multiple mixtures made with oil, which are used in Voodoo, to take a bath with or apply to one’s body.

Another method is lighting a purple candle while pronouncing a certain spell.

Indian sorcerers are able to send curses back, “against the stream,” causing death to the curser.

Traditionally, the most propitious time for laying on and breaking curses is during the waning of the moon.

A common form of the Rede is, “An it harm none, do what ye will.”

The idea of the Wiccan Rede is that each person can choose his way, unless it doesn’t harm other people.

“Wiccan Rede” derives from the Old English “wicca” (“witch”) and “roedan” (“lead,” “guide”). In the Old English, “an” is an abbreviated form of “and.” Some translate this word as “if.” The exact origin of the word combination “Wiccan Rede” is unknown.

Gerald Gardner believed that the author of the rede was the legendary king Pozol. His rede became the motto for many generations of witches. Maybe, it appeared not that long ago, in the 1940s or early 1950s, when the so called “Gardner’s tradition” of modern witchcraft was being formed.

PEI (Isaak) Bonewitz assumed that Gardner, who borrowed a lot from Aleister Crawley, created his rede by changing Aleister’s motto, “Do what thou will and that will be the whole of the law.” Crawley believed that if people cognize their true wishes, they will achieve harmony with the Universe.

Neo-pagan witches treat innocence and free will of all living creatures with respect and don’t believe in using magic to interfere in their being. For example, to put a love spell on a person, the witch creates a spell that will trigger true love for the benefit of all. Some witches believe they can’t create spells without asking the person who their spell is aimed at for a permission first, even if it’s about healing.

Those who don’t follow these rules of the Wiccan Rede will be punished and their punishment will be like a karmic boomerang, and the evil they’ve created will fall down on their heads.

This interpretation of the Rede seems too extreme for some from the craft, as it prohibits creating spells against evil-doers: witches can’t use magic to stop a rapist or a murderer, because by doing so they will influence his will. Followers of the conservative interpretation disagree that a spell can be put that will protect the victim.

Other witches evade the ban by sending a “binding” spell, which stops or prevents evil. A spell put on a murderer won’t be a curse but will lead to him being caught.

One of the most famous binding spells was created in San Francisco in 1980. It was put on a serial killer Mister Tam who attacked his victims, mostly women, from ambush, shooting them. A group of witches with Z. Budapest as a leader put a binding spell on him, calling for the killer, who’d been on a wanted list for the last three years, to get mixed up in his own mistakes and sins. Within three months he made several mistakes which lead to his arrest. The killer was tried and sentenced to death.

Many witches use magic to help organizations advocating non-proliferation of nuclear weapons, environmental and animal protection (for example, to stop extermination of whales). Binding spells are used against gang members, scandalmongers and envious people. Spell casters can be subjective. A binding spell put on a co-worker who you’re clashing with can be regarded by some witches (not all of them) unethical. To be ethical, witches put their spells not on the person but on the situation. For example, instead of binding an enemy to solve some problem, the witch puts a spell on the problem “for the common good.” Or, instead of putting a love spell on someone, the witch creates a spell to excite “true pure love.”

Many witches believe that interpretations of the Wiccan Rede are too contradictory and don’t allow them to practice magic, reducing it to “Bambi magic.” Bronewitz claims that if it’s possible to take the responsibility and stop a crime physically, it can as well be done by magic. Some witches put spells if they feel they have the right to do so.